I weighed myself, but I didn't write it down. Instead of guessing ( even though I'm pretty sure I was down 4/10ths) I'll just make sure that I write it down tomorrow. I jut found my little weight book, so I definitely will have a weight tomorrow.

So I went back to TOPS last night, and it was a big, fat, non-event. Even though I went into the kind of tantrum-y dramatics reserved for toddlers, divas, or diva toddlers I really didn't want any fanfare and  frippery upon my return. I was glad that I went because Bertha graduated from a TOPS ( taking off pounds sensibly) to a KOPS ( keeping off pounds sensibly) because she finally hit her goal weight. I was probably more excited for her than I would have been if it had happened to me. That was really cool :) 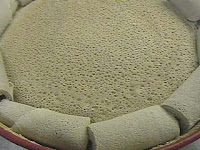 On Mother's Day I was really peeved, because I drove all the way to North Dallas for Ethiopian food and I could barely eat any. I ordered lega tibs ( sauteed cubed beef with onions, pepper, tomato, ginger, rosemary and other spices) and the vegetarian combo ( different varieties of lentils, spinach, cabbage, onion and carrots, sald with lemon vinaigrette). It was slap ya mama, 3 snaps in a "Z" formation, don't touch my food or you're liable to get your fingers bit, kind of good. I loaded up my saucer with the lega tibs and a small bit of the lentils and I ate just a few bites and I felt it in my throaK. I knew that if I had the injera (this spongy bread on which the food is served on and you also use to eat it with) I would have been as bloated as a tick in the pound on a June afternoon, but I didn't even touch the stuff!!!! UGH.

Email ThisBlogThis!Share to TwitterShare to FacebookShare to Pinterest
Labels: a loss is a loss no matter how small, bariatric, food choices, Gastric Sleeve, gastric sleeve blog, my love for all things cake, my scale has a name and I call her bessie, TOPS, Vertical Sleeve Gastrectomy, VSG, VSG surgery blog, weight loss after VSG surgery, weight loss surgery, whine and cheese