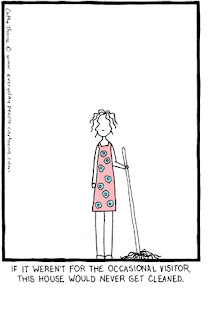 I didn't go to TOPS last night because I was in a frenzy trying to get the house spic and span for my brother in law to visit. I was running around like a chicken with its head cut off, a bat out of hell (and whatever other animal you want to throw into the menagerie) only to realize that he gets in tomorrow. Oh well, at least I won't have much to do tonight.

I really didn't mind not going to TOPS because the passive aggressive part of me secretly delights in the idea that they think I'm not coming back. Hey, I'm just being honest. I got an apology a few days ago from the offending party AND I even got a phone call from the area director of TOPS telling me that I was doing really well and that she was proud of me. I was just kind of taken aback by that second phone call and I was like, "Uhhhh, thanks? Can you call me back because I'm on the phone with t-mobile?" LOL. I really was on the phone with t-mobile. The phone calls were a nice touch though.

This morning, I've been feeling slightly nauseous. I had some peanut butter and about a half way through the spoon, Sleevie started to express his discomfort. A bit later, I decided to have a wasa cracker with cream cheese and I took one bite, and Sleevie started acting up again. UGH! So we'll just have to see. Hopefully his behavior will improve and then I can give him a reward. If not he's going to obedience school!

Email ThisBlogThis!Share to TwitterShare to FacebookShare to Pinterest
Labels: a loss is a loss no matter how small, bariatric, Gastric Sleeve, gastric sleeve blog, my scale has a name and I call her bessie, TOPS, Vertical Sleeve Gastrectomy, VSG, VSG surgery blog, weight loss after VSG surgery, weight loss surgery