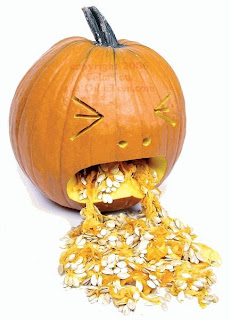 On Thursday, I threw up. I don't know if it was the food or what, but it  wasn't a little foamy yuckiness that slid back up my esophaghus, or something that I just spit out with ease. It was a freshman year in college, bent over,  standing on your tippy toe, "Sweeet Jeeeezus is there a God" kind of episode. I don't know what triggered it, but it was terrible. We were grocery shopping when I got the disgusting waterfall mouth and I knew that nausea was knocking on my uvula the door. I got the keys hurried to the car, and sat in the passenger seat, door ajar. Then it came.

It felt like my stomach was BA-REAKING. The food, thick because I can't eat and drink at the same time, had terribly hard time coming up my gullet so poor Sleevie had to work that much harder. Ugh, it hurt so bad. After the first bit came up, I reclined back into the seat, perspiration dotting my brow. Another wave hit me, and so I leaned out of the car and let that hit the pavement, too. When it was all done, I looked down at this tiny puddle of masticated mess that had caused me so much distress. Really? All of that work?

I'm no stranger to throwing up, but before surgery it was pretty much a non-event. Not really something to put on a wishlist, but nothing that really was a day ruiner. This, this right here, is something that I NEVER, EVER, EVER, EVER, EVER want to do again. Because I don't know what caused it, I will be avoiding pork roast, supermarkets, shopping carts, aisle 15 in ANY store, my mother in law, Periodic Table, the outfit I was wearing that day, and CoverGirl lip gloss. There.