This whole upchucking/nausea thing seems to be a reoccurring theme throughout my last few blog entries. Today is no exception.

The other night, well morning actually, I had a dream that I was in the kitchen with an old cheerleader buddy from high school. We were talking and all of a sudden she started throwing up which made me throw up. I must have been straddling that fine line between being asleep and being awake because the next thing I know, I'm waking up and the front of my shirt is SOAKED with saliva and I got the whole waterfall mouth thing going on. UGH! In my mind it seemed like I hurried off to the bathroom, but later Periodic Table told me that I just woke up like it was no big deal to have the front of my shirt soaked with spittle. I didn't throw up, but it was just really weird.

Around Easter, I went shopping at a thrift store for some pants. When I tried them on, they buttoned, but they didn't fit well at all. They were SOOOOOO tight it was like having a second epidermis. Real talk. I couldn't even bend my knees in these damn things. Fat forward to about a week ago and I put them on and they were pulling-them-up-as-I-walk-baggy. I can even put them on and take them off without unbuttoning them. 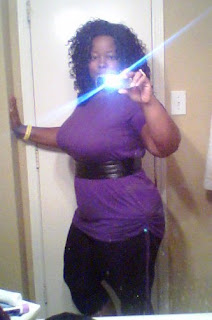 Well, here's the pic that I promised. I took this on Saturday night. If I was sucking in any harder, I would have passed out!