I had an adventure last night that involved keys, moscato, a comedy show, strippers (don't ask),car trunks and hood chicks with gold teeth. It sounds random as hell and probably not nearly as exciting as the adventure conjured up by one's imagination, but I had fun. As I lose weight, I'm really enjoying getting out and having girl's nights. 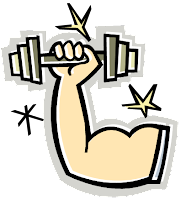 I'm really starting to become a gym junkie. I guess since I'm not thinking about food all day, there's a vacuum in the obsession area of my brain. Right now exercise is speeding into the dark vortex area of my gray matter that has at one time or another held captive a cashier at Winn Dixie, CAKE, The Rock, eating cake off of The Rock, Mr Wizards World, peanut butter and blueberry preserve sandwiches, and The Sims. This is is by no means exhaustive, yall. Anyway enough about my crazy and back to gym stuff.

I don't really care for cardio, but I lurve weight training. I think that I have zero slow twitch muscle in my body because even at the pinnacle of bodily perfection ( on the track team mind you!) running a mile would damn near keeeeeeeel me. Weight training, I can do! That has been my focus at the gym and I hit the weights and I'm out in less than 40 minutes. I like it so much that I want to go more than once a day(obsession kicking in) but overworking your muscles in counterproductive because they grow when you're resting. It's explained here.


When you lift weight, you're supposed to stress the muscle to the extent that it breaks down at the cellular level, resulting in increased protein synthesis, which produces thicker muscle fibers. This process begins 2-4 hours after the workout and lasts 24 hours[1] (although some researchers suggest that muscles worked to exhaustion need 36-48 hours to rebuild[2]). If you stress the muscle again before the process is complete, you'll break down the muscle fibers before they've had a chance to rebuild.[1]

I hope I can keep up this momentum while the gettin is good!