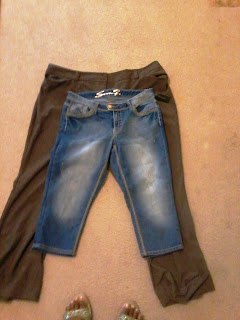 Around 10 am sounds of the dog barking and of the phone ringing roused me from my slumber. Still straddling the line between sleep and consciousness and unable form a complete thought, I told the dog to SHUT UP! and silenced the phone. Peeved because I was unable to go back to sleep, I just laid in the bed until the fog in brain began to clear and I remembered "HOLY CRAP!!! THAT WAS THE PEOPLE I WAS SUPPOSED TO GIVE MY CLOTHES TO!" I jumped up dang near nekkid trying to get the stuff together and told the poor man who was just outside a'waitin and a'sweatin that I would be right there. I've been throwing all of my too big stuff into a trash bag in the corner of my bedroom so it was pretty easy to get it all together. I gathered up some of it, but I didn't want to give it all away. Some of the stuff with tags is going into a garage sale and there are a few things that I just want to keep as a reminder of where I've come from. I took this picture this morning and i wanted to share it with you.These pants were toight (tight) before surgery and these are the capris I bought yesterday. They're tight in the waist, but still, I've come so far.

Well, I've been talking to the radiant attic guys for like 2 hours and now I have to go. Sorry so short.