VSG surgery 145 What thehell is going on

Remember how I said that I wasn't really trippin about my weight loss, or lack thereof, because I was "training like a she-hulk"? Well that was like a week ago, and the damn thing still isn't moving. Well, it IS moving , just not the fricking direction that it needs to be moving. So here it is a week later and I am kinda trippin. UUUUUGGGHHHH.
*head back, groaning with an eyeroll SO fierce my eye ligaments are stretching*
Can I have permission to just collapse in a puddle onto the floor and have display of frustration that includes
A) gnashing of teeth
B) a'weepin and a'wailing
C) and the frustrated toddler body arch/stiffening thing that they do?

While it sounds like I'm freaking out, I'm not really freaking out. Ok I am, but the part about the weight gain that's got me frustrated is that I'm out of my new second number. Its just a fraction of a pound but its enough to make me roll my eyes....HARD! 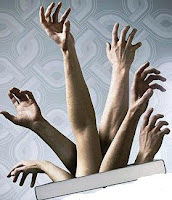 I think that my new scale, Bessie part duex, is a machine. Not a nice machine, but a machine in one of those post-apocolyptic, colorless and dirty, Terminator type scenarios. I have a sociopath for a scale and she is getting off on messing with me and she's making me think that I'm the crazy one. Sociopaths are experts at doing THAT. Nothing has been right since Bessie's untimely passing. Maybe this is some Pet Semetery type of mess that's going on in my house. Maybe I have a zombie scale in my house. Maybe the ghost of Bessie is haunting the new scale because she's pissed that I didn't treat her right while she was here. Maybe, just maybe that evil scale genie is real after all. All I know is that there has to be some otherwordly, portal to another dimension, supernatural stuff going on because there is no way that I am getting bigger. I might be crazy, but I'm rational enough to know that. Still, I don't have to like it when the scale goes up.