I hit the new number yesterday, but I wasn't sure if that was only because I'd been sick the night before. Like for real IWANTMYMAMA kinda sick. Up until the other night I'd only been constipated once in my adult life and that was thanks to two weeks of optifast presurgery. After dealing with that two day ordeal, experience told,"Oh hell no, Waning Woman. Remember when it felt like your entire pelvic region was about to explode? Unless you want to birth another potato out of your ass, I suggest that you go ahead and handle this NOW!" I'm telling you it hurt from the cooter to the pooter and there were certified grown woman tears involved That was certainly something I didn't want to have to experience ever again.
Anyway, I didn't want to wait for a top down treatment to work, so I got real familiar with Fleet the other night and let it do its job. After laying on the bathroom floor with my butt in the air a few minutes, everything came out fine.
Relieved that my bothersome bowel blockage was now on its way to some far, far away water treatment plant, I went to the couch and started to play on the xbox. Fleet must not have finished working because before I knew it, I was back on the bowl. No biggie. I went back a few more times, but suddenly I started to have the most intense cramping sensation.
JESUS BE A SWIFT AND SWEET BREEZE AND COME CARRY ME TO HEAVEN RIGHT NOW!
I was sitting on the toilet, sweat was dotting my brow and my body was covered with a sheen of sweat. I went from not being able to go  to not being able to stop from going and it hurt something terrible. It was so bad that all I could do was lay in the hallway outside of the bathroom door with a bedspread. I kept getting up to go the bowl every minute or so and the only way I can describe it is to say that it felt like I was throwing up out of my butt. That retching that makes your whole body shake and makes you get on your tippie toes like a ballerina was happening, it was just on the wrong end. Even when there was nothing more that could come out, I was still dry heaving out of my butt!!!  Ay Dios mio! Just as I thought that I couldn't take any more, it slowly started to ebb. Although I was shaky and worn out, the edge was taken off enough that I could actually get into the bed and go to sleep.
Whew, I'm wiped out just telling you guys about it.The next day, I felt like Naomi Campbell's hairline- dry, broke down, depleted, and in need of salvation, but holding on for dear life. 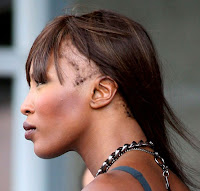