I'm sitting here choking down this cup of water, making faces like it's cheap vodka. UGHK! As much as it pains me to get it down, I know that staying hydrated is a big part of the formula for my success. Your mileage may vary.

I think that PT and The Kid are in a conspiracy to take my life.
dead.
kaput. 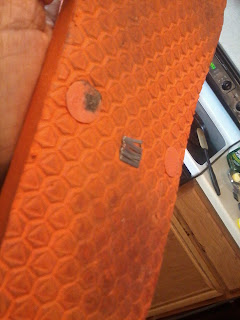 I happened to look on the bottom of my flip flop, and embedded there in the sole, just millimeters away from the network of veins and arteries ushering life giving blood around my body, was a bunch of STAPLES!!!! There, neatly in a row, these lethal slivers of metal, were ready to take me out. Were it not for the flip flop foiling their damnable plans, Waning Woman would be a wrap.
I'm telling you guys, if I come up missing, launch a full scale investigation and don't let them say that it was the koalakeys.
PT has a background in body disposal, bomb dispersion, knife sharpening, the CIA, kidnapped person retrieval, rooster fighting, pizza eating, biological weapons design, AND he has a metal plate in his head. As for The Kid, don't put anything past a 3 y.o. ......Period.

Back to staples, it annoys me to no end to hear the Gastric Sleeve referred to as stomach stapling. There are staples used in the procedure, but they are simply used to close off the leftover stomach. Instead of using sutures, a slower and less reliable way of closure, they use staples. This is what wikipedia says.


Stapling is much faster than suturing by hand, and also more accurate and consistent. In bowel and lung surgery, staples are primarily used because staple lines are less likely to leak blood, air or bowel contents.

There is an enormous difference between the Gastric Sleeve and stomach stapling , an archaic, rare procedure that is hardly ever done anymore.

Well, now I can get down from my soapbox and go chug down another glass of water. UGHK!