Dinner last night was a vegan tamale ( the bomb!!!) and PT decided that he wanted to make some cookies for dessert. When they came out of the oven, there was just a hint of a light brown ring encircling them while the middles were still soft. They smelled delicious! I grabbed two....then one more........and one more. And only then did I realize that I overdid it.
I wasn't the number of them, it was only 4, but it was the way that I ate them. I ate them SO fast that I didn't realize that they were cloying sweet and not really Sleevie Wonder friendly until I'd finished them all. I cookie monstered those things and before I knew it, I was sitting there with a sick feeling in my belly.
While I know that I will never be one of those sanctimonious, transfat crucifying people who eschews cookies and the good stuff for life, part of me wishes that I could be.
I wish that The Beast could be banished to some far away island or be cursed like Medusa to live trapped forever in stone. 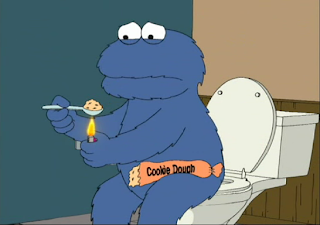 This isn't just a woefest, though. Even with the cookie episode last night, my weight wasn't negatively affected. I'm lighter than I was yesterday and I could even potentially be out of this middle number by the end of the year. If not that, I know without a shadow of a doubt I will hit 120 lbs lost this month.  AND, I only ate one tamale last night. :)