My phone died. *sigh*. It was a rather expensive touchscreen phone and I've had it for about 6 months. No more twitter, no more pics, no more email, no life. WAAAAAAHHHHHH! I'm gonna go to the store and see what they tell me, but I already know that the outcome won't be good. They will insist that I did something to mess up the phone. Right now I'm using the world's worst phone just so I can at least stay somewhat connected to the world. When I say the world, I mean PT calling to ask me what he's gonna eat. 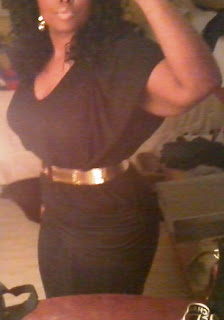 I had some pictures in my phone and I was gonna do a  few food reviews this week, but without the pictures to back up what I'm talking about they won't be as good as I want them to be. Oh well, I'll do plenty more eating in 2011. I DO however have a picture of me on NYE. I'm wearing this awesome vintage belt that my mom's had longer than I've been alive.

This past week my eating was pretty much as it is all the time. Summa this, summa that-mostly protein- and a few protein shakes thrown in for good measure.While at my parents' house, I went to my favorite whole in the wall, fried chicken shack. I always get wings and I can 1 to 1 1/2 depending on how big they are. I love that damn chicken (...insert joke about Black people and chicken here...) Yesterday I went to this Thai restaurant and had an eggroll and as much of the red curry that I could get in.The curry was incredible and agreeable to Sleevie, but the service was excruciatingly slow, painfully slow. I might give them one more try before I "x" them off of my list. Ixnay on the ow service slay.

Well, I've got to get ready for therapy, so I will