My gym membership has expired and I've tried doing some stuff around the house but I don't get the burn that I need. I don't want to renew it until PT is ready to start going because it works out to be a lot cheaper to get the family plan. So what is a girl of limited means to do?
GYM SURF!!
I am going to exhaust every free trial of every single gym in a twenty mile radius. My first stop was Curves. 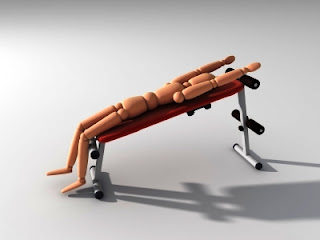 I went in there yesterday and the girl at the desk was nice enough. A little frumpy looking and definitely in need of a better bra, but nice enough. She sat me down, asked me a number of questions-Why didn't I want to go back to my old gym? Did my doctor know I was exercising? Had I ever had a weight problem? Do you have a support system? Is someone making you work out? I obligingly answered them, even though I thought a few of them were just a bit nosy. After our 5 minute Q and A, she immediately got out her paper and pen and started scribbling out the price structures on their 2 memberships plans. A year paid up in advance was 400 something and the month to month was 49.00 down and around 34 bucks a month. Whoa, whoa, whoa Nelly!

ww-"I'd like to get my free one week trial if that's ok. I don't want to commit to anything just yet."
her-"Mmmm, well. Ok. I can only offer you the discounted enrollment of 49 dollars on your very first visit here. If you chose to join up after this, it will be the regular rate of 99 dollars."
ww-"Uhhh..ok"
her-"Well, here is some more paperwork to fill out."
...2 minutes later...
her-"Well would you like to schedule a time to come back so I can show you how to work the circuit?"
me, CLEARLY dressed in my workout clothes and ready to go-"Why not now?"

Sooo we went around the circuit. She did a good job explaining the machines, so if somebody came in and had no idea what to do, they wouldn't be intimidated. I give her an A for that. As we went around the circuit though, she said a few things that made my bullshit meter go off though. For one she said that I the machines would scale up to my fitness level and as I progresses I would never have to worry about outdoing the machine. Really? Cause I just almost broke your shoulder press machine back there. There is an upper limit to the amount of resistance that they can provide.
After we went around the circuit together, I went around once on my own. I overheard the girl talking and she said that she could wear a Mavericks shirt to school and that the prinical would be ok with it. I then asked her what school she worked at. "Oh no," she replied. "I'm in high school. I graduate this year." Things that make you go hmmm.
Once I was done with that I went to the stretching area.
They have this giant steel structure that looks like it belongs in a swinger's club. It is the absolute best part of Curves! Once I was done with that, I felt super limber and relaxed and ready to go. I said my goodbyes and told them I'd see them tomorrow.

Here are the pros:
If you're pressed for time, you get right in and get right out. 30 minutes isn't too long.
Its all women, so you don't have to worry about creepy guys.
If you're just starting out exercising, the level will be enough to work you out without scaring you off.
That stretching station is THE TRUTH!

Here are the cons:
They immediately went into the sale without showing me around. Major deduction.
There was a freaking high schooler there running the place.
If you've worked out with weights, the resistance machines WILL NOT be enough. I didn't even break a sweat.
No childcare.
For the monthly rate you could go somewhere that offers more than just a circuit and a few 5lb weights.
Irregular hours of operation.


Overall, if you are a gym newbie its a good fit, otherwise spend your hard earned money somewhere else.
Image: Idea go / FreeDigitalPhotos.net