Well, if you've been reading my blog for a while, you know of my love for Premier Protein's shakes. Because I'm almost 20 months out I don't rely on them as heavily as I once did, but you can guarantee that there will always be a case of them in my house.

I've tried the chocolate, the vanilla, and now here is my review of the third shake in this trifecta of goodness!

Truth be told, I was really hoping for a small, show tune singing, strawberry to jump into my mouth and start jazzhandsing it. What I got was a slightly washed up, middle aged, crooked wig wearing, strawberry singing Tina Turner covers and chain smoking. Not as energetic, but still entertaining nonetheless.
The strawberry shake had more like the essence of strawberry and I thought that it tasted an awful lot like the vanilla. That's not a BAD thing though cause I did like the vanilla. I will repeat though, This Is Not A Bad Thing, just different than I expected.
Premier has added another solid product to their line. It isn't overly sweet, overly thick, and it has a really clean taste. The flavor actually kinda reminds me a bit of Quik and I say that in the most nostalgic way possible. I like it, I really do.

Let's look at the stats, though. These magical numbers are what sets Premier's shakes away from the rest of the bunch.

Post ops, who're dealing with limited stomach capacity need the most bang for their buck. Let's look at some math here.

So you take the grams of protein, multiply it by the exponential goodness of CAKE (everything in life as to do with cake), divide it my the numbers of times I have told you I'm lazy and inefficient minus the number of pairs of shoes in my closet, then divide by the inverse of the cube root of my fabulousness and you get something that looks like this.

Premier is the protein champ and packs in a ton of protein in a really small package. You would have to drink 2 of the AA shakes to get the amount of protein found in one Premier Shake.

Anyway I'm going to wrap this up by telling you that I would gladly drink any of their shakes. I support their products and I support who they are as a company. They were the only company to support me in the Walk From Obesity and that really says something. In addition to that, they have top notch customer service, so should you have problems with any shakes, send them an email and let them know. FYI, they're not paying me one cent for anything I have written here although I am not above taking envelopes in clandestine meetings in seedy places . I'm just showing some love to the Premier Protein peeps for the love they've shown me. 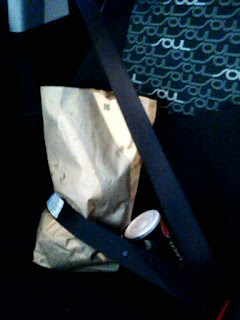 Yes, I put my burgers in the seat belt. They're that good. Don't judge me.
2 comments: Links to this post


How are yall doing out there this fine and lovely Thursday? My noncompliant ass (we'll get more to that in just a second) is sitting around the house not doing much of anything. In fact that's pretty much been my week. Wake up, browse the web, clean the house, browse the web some more, check craigslists to see if there are are any errands boy for sale, lay back down, take my Pirin tablets, and browse the web some more. I did find  a shaman on CL offering his onion blessing ceremony for dirt cheap.

Why, oh why, have I allowed my acid reflux to get out of hand? I guess that I was hoping that I was "cured" and didn't have to take my medicine anymore. It's stupid, I know, but a girl can wish. Because of my imaginary curedness, I didn't go buy any of my heavy duty ppi's and was just taking h2 blockers. Um, wrong answer, bitch. I was popping those h2 blockers multiple times a day and you're only supposed to take them twice. The kick in my ass that made me realize I needed to stop playing was when I popped that Zantac and not even an hour later my innards were burning like the panties on a meth prostitute. I wasn't sure if I needed a penicillin shot right in my throaK or Prevacid. Needless to say, I'm gonna make sure that I rein this throat burning terror back in.

I'm still losing weight. I've lost 5 lbs since I can back from Nola and I'm not quite sure how. I've not been to the gym, lifted one weight, counted one stitch of anything I put in my mouth...It's baffling.  Five pounds used to not seem like a lot, but it's a big freaking deal at the weight I am now.
I've actually hit yet another new all time low. I count the weight that I lost on two weeks of Optifast before surgery cause I certainly earned that weight loss, so with that and surgery, I've lost just a smidge over 157 pounds. God, that's a lot of weight!

I don't know what else to say.


It's been a while since I've blogged and I hope that you guys don't feel neglected. I've still got a touch of the nojo and there are a lot of things swirling on around me. Some are good, some are neutral, some are horrible, some are new, some are ongoing but it's just life. I am proud to say that I am doing incredibly well with my weight, though.

Let's just get the horrible out of the way. My best friend/sister, Headlights, is in the middle of a life altering health crisis and I've been spending lots of time at doctor's appointments and I will be doing so for the foreseeable future. That's all I care to speak on the matter.

The good? I've been working on these new connections that I made at the Obesity Help conference in Nola, and in addition to that, I'm supposed to be revamping my blog. The truth of it is I am absolutely petrified into inaction. I am so flummoxed by the number of design choices that it makes me just stop after about 15 minutes. Anybody with design expertise care to help?

Here is the biggest thing going on in my life. The enormously, enormous, enormity is my new charge. Charge? "What kind of charge?" you ask. Well, lets look at the possibilities.

Maybe you're thinking I finally kidnapped that Ethiopian woman I've been stalking. Never having to leave my house for Ethiopian food again is worth having to pee in a cup at a probation office and registering as an offender.

Petty larceny? Possibly ...FYI- Obesity Help, don't count the tshirts that you have left over from the Nola event and don't check Ebay. Word on the street is there are some bedazzled shirts on the market with your logo being sold by WinningWoman for 49.99 a pop. Don't check. I told you. Ignorance is bliss.

Maybe my bad habit of snatching cupcakes from strangers finally caught up with me. I'm like the best NYC purse bandit you've ever seen, except it's cupcakes instead of Coach bags.

Shockingly enough, my miscreant lifestyle hasn't caught up with me. The charge to which I am referring, is in the most British of charges...a new freaking kid!!! I am the "in loco parentis" with guardianship rights equal to a parent. Haha...loco...I think I switched the language from Latin to Spanish.

Her guardian is a brother to me and when he asked if I would keep her if he got deployed to Afghanistan, there wasn't even any hesitation on my part. He got the orders and I got a 12 year old daughter for the school year, Missy.

My life has radically changed in the past 6 weeks, but you know what? I already cannot imagine her not being here. I have far less time to sit around on my ass, but I don't want to. Having a 12 year old girl in the house, makes me want to be a better woman. I need to model myself in a manner that I would be happy for her to emulate. I'm neater, more prompt, more domestic, more patient.. I actually didn't know that these qualities were in me, but they've surfaced with no resistance. Hmm. Who knew?

Anyway, I was just giving you guys a heads up as to what's going on in my life and why I haven't been around as much. Once I get settled into our new routine, hopefully you'll be seeing more of me :)

Oh yeah, I'm having a fan appreciation giveaway on the Waning Woman FB fan page, so comment on the thread for your chance to enter. You can comment on yesterdays thread and Friday's, too if you want.
4 comments: Links to this post