Potatoes.
Mmmmmmmm.
I used to love potatoes in my preop life. Scratch that. I used to "big puffy heart, I wanna marry, totally twitterpated, completely head over heels crazy" potatoes. And honestly, what's there not to love?
They can easily be the supporting actor of any meal or step up and take the starring role. They can be the Denzel of the dinner table or the "Oh that's his name"
You can fry them, bake them, roast them, cover them in cheese, au gratin them, fricasse them, rotisserie them. In fact, the only thing more cheap and versatile is a Swiss Army Knife on clearance at Thrift World.
Potatoes are nutritious and great in MODERATION, but the problem is, they're so faboosh, its hard to have them in moderation. There is nothing quite like potatoes and most substitutes are piss poor facsimiles of the real thing. But, I've come up with something that is truly almost as good as the real thing.- Spaghetti Squash Browns!
This is more a set of directions than a true recipe, but the outcome is pretty darn tasty.
You'll need a spaghetti squash, onion, beaten egg, oil, salt and pepper.
Cut the squash in half lengthwise, scoop out the insides and place on a microwave safe plate, facedown. Add a few tablespoons of water and cook on high for about 7 minutes until it goes from looking like it does on the left to the right. 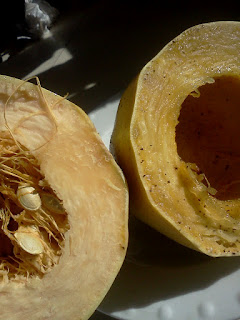 Let the squash cool and then scoop it out. Mix the squash, salt and pepper, and about half of the egg mixture until it is thouroughly and evenly combined. Feel free to add minced onion to up the delicious quotient. 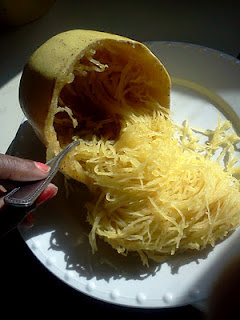 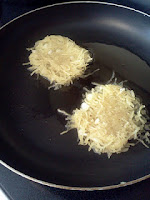 In a skillet over MEDIUM LOW HEAT heat a small amout of oil and add the spaghetti squash mixture and cook until golden brown on one side (make sure it has a good crust because it may fall apart) and then flip to the other.

If it does fall apart, I promise you its still as delicious. Just tell people they're scattered ala Waffle House.
Easy, peasy delicious.


What are some easy, delicous recipes that you like?